Twelve acres of tranquil gardens are surrounded by ancient parkland studded with stately oaks and chestnuts.

Twelve acres of tranquil gardens are surrounded by ancient parkland studded with stately oaks and chestnuts.

Four hundred years of changing garden fashions have contributed to a landscape which is now predominantly Reginald Blomfield’s 1898 design.

Terraced lawns bordered by a vast yew hedge and topiaried box have been softened over the last century by the addition of long, curvy-edged herbaceous borders and ornamental tree and shrub plantings. All areas of the garden continue to be restored and maintained to an unusually high standard. 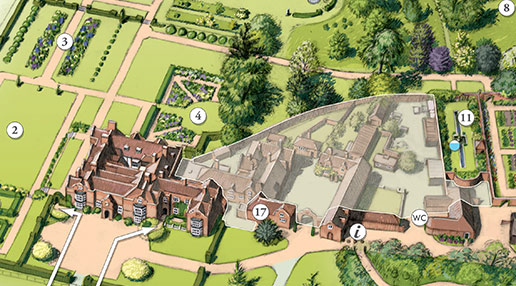 3 miles from Junction 9 on the M20 at Ashford. Follow the signs from the A20, just 1 minute to the main gate

The seasonal changes in the garden are moving on apace now with deciduous trees and shrubs dramatically colouring to beautiful reds, oranges and yellows. Mushrooms and fungi have appeared with the rain and geese have been flying over in long, noisy skeins. You may have noticed that the red colours are particularly strong this year. … Find out more →